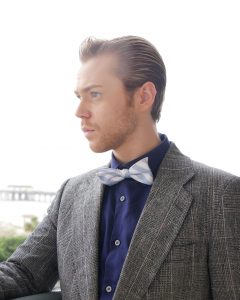 Pat Graham Crowe II (b. 1992) is an organist, pianist, sopranist-countertenor, and baritone.  A native of Davidson, North Carolina, USA, Mr. Crowe is an active musician, pedagogue and technology consultant in Houston, Texas, North Carolina, and abroad.  Currently, Mr. Crowe serves as a member of the Arts Pillar Faculty of Episcopal High School in Bellaire, Texas, as well as Director of Technology for the Lister-Sink Institute in Winston-Salem, North Carolina. At Episcopal, Pat serves as the Administrator for the Private Music Lesson Program, Instructor for Class Piano, as well as Accompanist and Assistant Organist.

A classical organist by degree and calling, Pat was a 2017 recipient of the Master of Music Degree in Organ Performance, with an Emphasis in Church Music from the Mercer University Townsend School of Music, in Macon, Georgia, USA.  During his Masters, Pat studied under a full-tuition assistantship, as a student of esteemed organist/pedagogue, Jack Mitchener.  Over the course of his time at Mercer, Pat was a graduate assistant for both the departments of Organ and Music Theory.

Pat’s formative keyboard studies were set into motion at the age of six, under the direction of pianists Charlotte Penland, and later Becky Sandquist.  As a teenager, Mr. Crowe studied piano and organ performance under the tutelage of organist Jacqueline Yost, Lecturer of Music Theory and Applied Organ at the University of North Carolina at Charlotte, and Director of Music at First Presbyterian Church of Concord, NC.

Subsequent to studying organ performance under scholarship in 2010 at the Eastman School of Music, in Rochester, NY, USA, Pat returned to North Carolina as a student of internationally-renowned pianist and expert in the field of Injury-Preventive Keyboard Technique, Barbara Lister-Sink, becoming the youngest recipient to earn the Professional Certificate for Injury-Preventive Keyboard Technique from Salem College.  The Lister-Sink Method forms the basis of Pat’s technical and pedagogical approach to all keyboard instruments. In 2015, Mr. Crowe received the Bachelor of Music Degree in Organ Performance from the University of North Carolina School of the Arts.  There, he studied as a Kenan Organ Scholar under professor Timothy Olsen.  Adjunctively in various master classes and workshops, Mr. Crowe has studied with Christa Rakich, Charles Tompkins, Ken Cowan, Alan Morrison, Eric Plutz, Matthew Lewis, Jonathan Biggers, David Arcus, Diane Meredith Belcher, Clive Driskill-Smith, William Porter, Stephen Tharp, others.  As a performer, Mr. Crowe is frequently called upon for his musicality, expressivity, fire, elegance, and creative spark in musical interpretation.

In addition to his studies as an organist, Mr. Crowe is a sopranist-countertenor and baritone, currently studying voice under the tutelage of Joan Jacobowsky, Professor Emerita at Salem College.  Mr. Crowe’s vocal range spans that of three and a half octaves “G2-Bb5”, giving him the ability to sing a variety of roles, from coloratura to lyric. As Director of Technology for the Lister-Sink Institute, Mr. Crowe is working with Barbara Lister-Sink on the development of a new web app, designed to help injured keyboardists, and enhance the musical artistry of pianists and organists through well-coordinated, injury-preventive keyboard technique. When Mr. Crowe is not preoccupied by his musical endeavors, he enjoys cooking, attending live jazz concerts, museums and historic architectural tours, studies of history and psychology, volunteer work, and extensive work with audio engineering, technological consulting, web marketing, and graphic design. www.PatGrahamCrowe.com